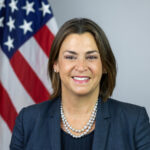 Deputy Homeland Security Advisor for Resilience and Response, Special Assistant to the President
White House National Security Council
Caitlin Durkovich is the Special Assistant to the President and Deputy Homeland Security Advisor for Resilience and Response at the White House National Security Council (NSC). In this role, she leads the development of preparedness policies relating to the detection, prevention, mitigation, response to, and recovery from natural and manmade disasters. She also oversees strategic policy that builds resilience against systemic risks such as climate change, supply chain security, and an increasingly electrified and digitized infrastructure ecosystem. As the Senior Director, Ms. Durkovich is responsible for the advancement of national policies and programs that enhances the resilience of the United States, and strengthens the U.S. posture to physical and cyber threats to the nation’s critical infrastructure. Ms. Durkovich served as the presidentially appointed Assistant Secretary for Infrastructure Protection with the Department of Homeland Security (DHS) under the Obama Administration from 2012 to 2017. In that role, she led the mission to protect and manage risk to U.S. physical and cyber infrastructure. During this time, Ms. Durkovich presided over the development of Presidential Policy Directive 21: Critical Infrastructure Security and Resilience (2013), the Joint United States-Canada Electric Grid Security and Resilience Strategy (2016), and the National Space Weather Strategy (2015). Ms. Durkovich also served at the Chief of Staff of the DHS National Protection and Programs Directorate (the predecessor to the DHS Cybersecurity and Infrastructure Security Agency) from 2009 to 2012. Prior to joining the NSC, Ms. Durkovich was a Director at Toffler Associates and served as a Non-resident Senior Fellow at the Atlantic Council. She co-authored the development of a Scowcroft Center for Strategy and Security Report on The Future of DHS (August 2020), and has authored multiple documents including the “Critical Infrastructure” chapter in Beyond 9/11: Homeland Security for the Twenty-First Century (MIT Press, August 2020). Ms. Durkovich also served on the InfraGard National Members Alliance Board from 2018 to 2020. Ms. Durkovich earned a Bachelor of Arts degree in public policy studies from the Terry Sanford Institute of Public Policy at Duke University and a Certificate of Business Strategy from The Aspen Institute. She lives in Washington, D.C. with her husband, three children, and bulldog.