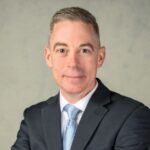 Vice President
Booz Allen Hamilton
Kevin Coggins leads Booz Allen’s Positioning, Navigation, and Timing (PNT) service offering, which focuses on helping clients address the challenges of resilient PNT. Previously, Kevin served as the director of the Assured PNT Cross-Functional team for the U.S. Army, where he was responsible for addressing the full scope of Army PNT capabilities and challenges, reporting directly to the Under Secretary of the Army. Prior to this, Kevin served as the direct reporting program manager for PNT, where he created the Army’s Assured PNT Program and introduced the PNT system of systems architecture. Prior to work with PNT initiatives, Kevin was the founder and chief executive officer for Harvest Applied Technologies, a company focused on the application of advanced sensor and signal processing technologies in the field of food safety and quality. He made significant contributions to this field with the support of federal agencies including the United States Department of Agriculture, Agricultural Research Service, and the National Science Foundation. Kevin has served in management and engineering roles in the defense industry in the fields of digital, radar, and electronic weapons systems design and automated testing. Kevin is a veteran of the U.S. Marine Corps and served as a Force Reconnaissance team leader. Kevin earned a B.S. in electrical engineering from the University of Florida. He is a member of the U.S. Army Acquisition Corps and has achieved Level III DAWIA certification for both program management and systems engineering. He is also a senior member of the Institute for Electrical and Electronics Engineers (IEEE) and member of the Institute of Navigation. Kevin has been involved in IEEE technical societies and conferences and has participated as author and session chair at several conferences.